“I am thrilled to say that the alliance between our nations has never been stronger,” said Donald Trump, turning to look at a smiling President Duda, “with you and I at the helm.”

On September 18, 2018, Polish President Andrzej Duda completed his first official White House visit, which culminated in a press conference and the signing of a joint statement. Filled with flattery, amicable exchanges, and seemingly productive deliberation, the visit presented itself as a comparatively well-received conference and produced little fodder for media outrage. The success of the meeting can be attributed partly to the large amounts of personal charisma between the two leaders, a charisma that becomes apparent in various photographs of the Presidents and the press conference itself. Poland’s not-so-subtle charm offensive and the leaders’ similar stances on business, trade, and military expenditure only further cement the good-humored relationship of both nations.

Amidst this glowing visit, President Trump and President Duda reaffirmed their “respect for and commitment to common democratic values,” prioritizing trade, defense, and energy cooperation to bolster security ties. President Trump commended Poland for its “burden sharing in NATO” (spending 2.5% of GDP on defense) and thanked Poland for its military support in various US missions. He reaffirmed the importance of energy diversity, pointing to the Three Seas Initiative and Poland’s construction of liquified natural gas (LNG) ports as heroic efforts to subvert the Russians’ dangerous aim of energy monopolization. President Duda affirmed the strong relationship between Poland and the United States, pointing to 100 years of diplomatic ties between both nations and highlighting figures such as President Woodrow Wilson and Ignacy Jan Paderewski. Pointing to Poland’s dynamic economy, President Duda encouraged stronger business ties and urged foreign investment. Once again highlighting the importance of military cooperation, the Polish President expressed his hope for permanent US troop presence in the form of a “Fort Trump.”

In the context of foreign policy aims, both the press conference and the signed joint statement exhibited considerable continuity in Poland’s strategy. The stressed importance of history fit in perfectly with the administration’s ongoing aim of correcting “deliberate or unintentional falsification of Polish history.” A commitment to energy diversification and the hope for permanent US troop presence on Polish soil reaffirmed the country’s belief that Russia exists as an aggressive agent that continuously undermines world order. Urging US businesses to invest in the nation and pointing to its practically non-stop growth allowed Poland to show that it had “entered the game on the international arena.” As a whole, the conference bolstered Poland’s goals of security, economic growth, and positive image.

The 2018 White House visit dealt the current Law and Justice party (PiS) a winning hand, giving considerable weight to its ambitious aspirations and producing a constructive and successful cooperation between two like-minded states. A deeper look at the statements made in the press conference, a comparison of the 2018 and the 2008 declarations, and a general understanding of the political landscape of EU-Poland relations are all factors that illuminate the broader shifts that have occurred in Polish politics.

The first shift presents itself as a changed idea of security threats. In the 2008 Declaration on Strategic Cooperation between the U.S. and Poland (a document that President Duda himself references in the press conference), the proliferation of weapons of mass destruction (WMDs) and international terrorism exist as the primary concerns of the two nations. Given the changing nature of the international environment, it is no surprise that these security concerns are updated in the 2018 Joint Statement. In reference to Russia’s 2016 annexation of Crimea and aggressive energy policies, both Heads of State rightfully identify Russian militancy as a threat. What is particularly striking, however, is the idea that “organized smuggling of immigrants” becomes an updated concern. Coupled with the unexplained statement that President Trump makes about both Poland and the US understanding “that strong nations must have very strong borders,” Poland’s general unease about migration (an unease that has been often labeled as xenophobia) becomes largely apparent. 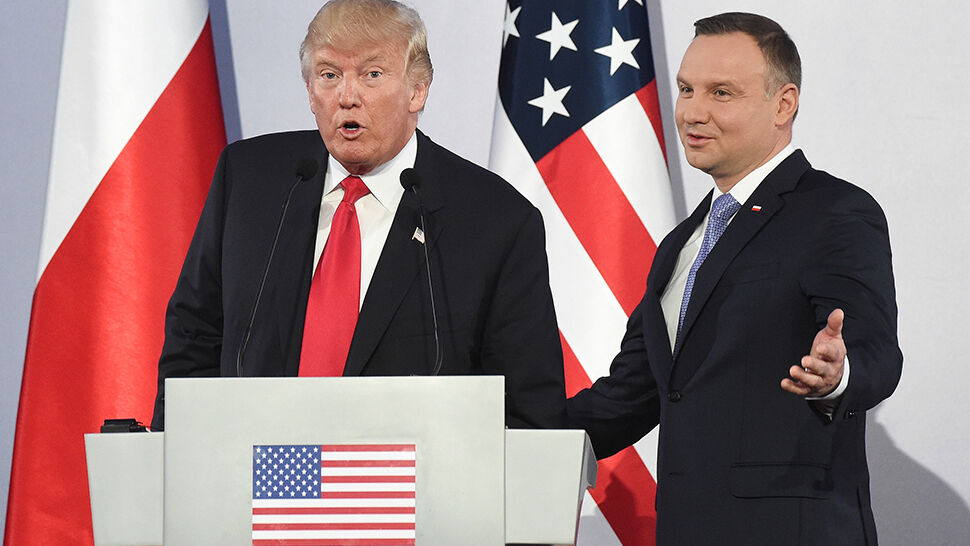 Poland’s seeming unwillingness to allow a broader scale of migration exists as a contentious point within the EU-Poland relationship. In the 2017 annual address of foreign policy aims, it was reiterated that Poland was, in fact, contributing to the migratory pressure on the EU by allowing over a million Ukrainians into the country. Warnings about possible cuts in EU funds to Poland were described as “wholly without merit.” On a similar note, Foreign Minister Jacek Czaputowicz presented the hard-line view that Poland is “against imposing a scheme of obligatory quotas for taking in refugees” in the 2018 annual address. Though often repeating its support of the European project, Poland asks to be left in peace by the EU, to be given enough space and time to implement its “Poland First” policy.

In the context of these tensions, the cozying up of Poland to the United States presents another potentially problematic shift. While the chair of the PiS party, Jaroslaw Kaczynski, offends Germany and plays memory politics with Ukraine, and while the administration refuses to concede to Brussels on matters of judicial reform, President Duda attempts to “inject an element of flattery” into politics by proposing a permanent US base. These efforts seem to be an attempt to check German and French influence with the overarching power of the US, a tactic that is plausible given Poland’s realist outlook on international relations.

Inviting into Europe permanent US troop presence during a time when Russia is trying to concede its influence in the post-Soviet region has the possibility of creating unnecessary security tensions. “Fort Trump” exists as a potential provocation and may lead to an increasingly aggressive response by the Kremlin. An angered Russia, and the increased strain that this would put on the alliance (in the context of EU-Russian trade agreements) is judged by critics to be an unwise mean to achieve the strategic end Poland craves.

Though shrouded in mutually flattering statements and seemingly constructive discussion, the visit of President Duda reveals the troubling state of EU-Poland relations in contrast to stellar ties between Poland and its transatlantic ally. The shifts in Polish foreign policy, shifts that were not mentioned in their entirety during the visit, reveal the tensions between Poland and the European Union. They unearth a Poland that adheres to its ideals and asks for the European project to butt out when convenient.