In response to the Assad regime’s suspected chemical weapons attack on the Syrian city of Douma on 7 and 8 April, the United States led an airstrike targeting the capital of Damascus. The coalition air strike, which involved French and British personnel and manned aircraft,  targeted sites around Damascus and Homs. With the United States taking the helm, the French and British government stress that their military response was successful, but limited. Although the attack was generally received well by the United States public, the governments and populace of France and the United Kingdom are more divided. In the wake of increased Russian aggression, as seen in the suspected nerve agent attack in England, and the strained relationship between the United States and Russia over Syria, the public is beginning to question the European military response.

For France, recent memory plagues the public’s view of military action in the Middle East. The 2011 Libyan operation, involving French and NATO allies in the struggle to topple dictator Muammar Gaddafi’s regime, set the fear of prolonged campaigns that prove to be costly. However, the French public is willing to give President Emmanuel Macron some leeway, as “because we don’t have an Iraq problem in France, people tend to trust the executive” on military action decisions. Macron emphasizes that military action was “France’s moral obligation,” as “we cannot tolerate the normalization of the employment of chemical weapons.”

In the case of the United Kingdom, there is political fallout over Britain’s participation in the strike and level of influence in the Anglo-American military dynamic. There is the Iraq problem hovering over British military action decision-making, as the decision of former Prime Minister Tony Blair to support President George W. Bush in the Iraq War led to disastrous results for the ‘misled’ country.” Leader of the opposition Labour Party Jeremy Corbyn accuses Prime Minister Theresa May of supporting British aggression, stating, “Britain should not be taking instructions from Washington and putting British military personnel in harm’s way.”  Corbyn also attacked the questioned British involvement by saying “this legally questionable action risks escalating further.” First Minister of Scotland Nicola Sturgeon gave a similar response about suspected British passivity, stating, “UK foreign policy should be set by Parliament, not US President.” She too questioned the effectiveness of the military action, arguing that “air strikes have not resolved situation in Syria so far — nothing I’ve heard persuades me they will do so now.” 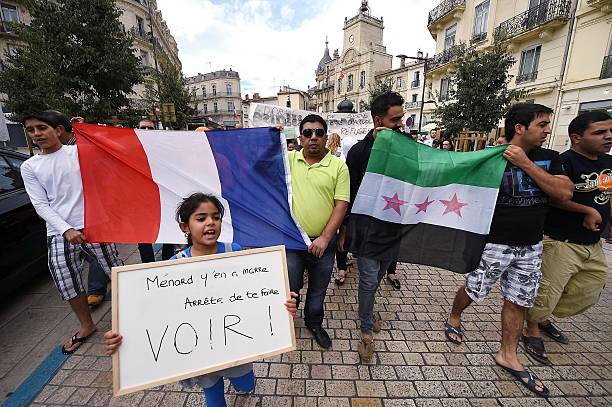 May also received criticism for supporting the United States and France with military action without seeking parliamentary approval. Although May is not required to win approval before setting forward with military action, critics say she could have called an emergency session to allow lawmakers the chance to vote and thus gain more political and public support. May defended her decision by stating that speed was essential after the suspected chemical weapons attack and “for operational security reasons, it was right that we acted the way we did.” However, Liberal Democrats leader Vince Cable responded that “riding the coattails of an erratic U.S. president is no substitute for a mandate from the House of Commons.” The question of military action in Syria has been a key issue in Parliament for several years. May’s predecessor, David Cameron, lost a crucial vote in Parliament in 2013 that was intended to allow for airstrikes against Assad’s regime. However, in 2015, he won a vote for the United Kingdom to take part in the American-led bombing campaign against ISIS in Syria.

May’s major justification for committing Britain to military action was based on the cause of humanitarian intervention. Appearing before Parliament, May called the chemical weapons attack a “stain on our humanity” by allowing such atrocities to occur. The Prime Minister said that “we have seen harrowing images of men, women and children lying dead with foam in their mouths.” This, she argued, was a matter of national interest, clarifying that the United Kingdom was “not just following orders from America” as Corbyn and Sturgeon suggested. In order to prevent such atrocities, she believes the United Kingdom has a right to “stand up for global rules and standards.” She contextualized her claim within more international law boundaries as the Syrian government failed to pledge to abandon chemical weapons along with the Organisation for the Prohibition of Chemical Weapons’ guidelines.

An official statement from 10 Downing Street stated that the military action was aimed to “alleviate the extreme humanitarian suffering of the Syrian people” and “deterring their [Assad regime’s] further use” of chemical weapons. The statement repeatedly emphasizes the suffering of the Syrian people and “considers that military action met the requirements of humanitarian intervention” successfully and legally. According to the statement, the United Kingdom was permitted “under international law” to take military action because there was “convincing evidence…accepted by the international community as a whole” of human suffering. As the Syrian regime has been using chemical weapons since 2013 and prior actions by the UK and international partners had been hindered by Russian vetoes on UN Security Council resolutions, there was no “practicable alternative” to alleviate humanitarian suffering.

View all posts by abbywhitlock